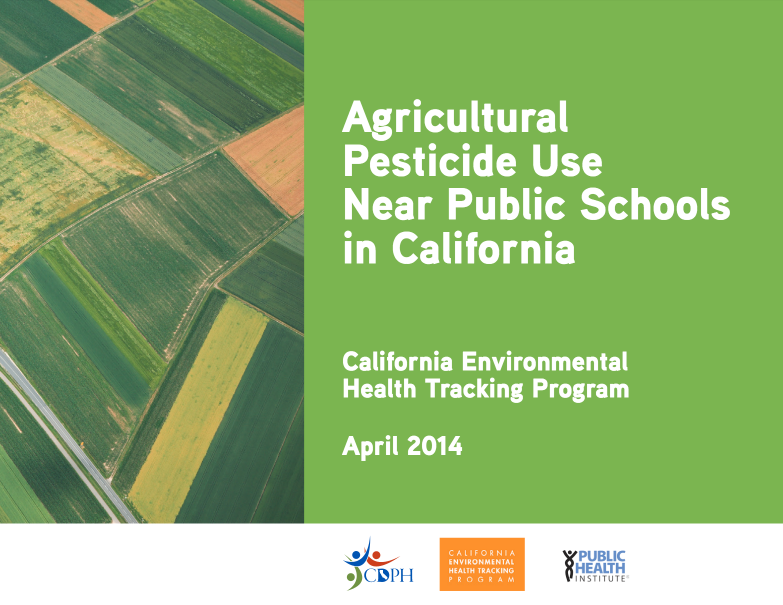 The study yielded new information about the types and amounts of pesticides applied near public schools and identified disparities among children attending schools near the most pesticide use.

This information has been used to help guide policies, research, and other efforts to reduce potential pesticide exposures among schoolchildren.  The results of this study are described in the report Agricultural Pesticide Use Near Public Schools in California.

California agriculture produces nearly half of all fruits and vegetables grown in the Unites States. These foods are essential components of a healthful diet and help promote public health here and throughout the country.  However, agricultural production frequently relies on the application of pesticides that, under some circumstances, can be hazardous to human health.  Compared with adults, children are more susceptible to the effects of pesticide exposure.

Step 2: Enhance pesticide application data  Records of pesticide applications (from the Department of Pesticide Regulation's Pesticide Use Reports) were linked with other data, including field locations and crop information, to better pinpoint where the pesticides were applied.  Eighty percent (80%) of PUR records were successfully matched to field-location data provided by county agricultural commissioners. The remaining PUR records were matched to fields based on Department of Water Resources land-use surveys (19% of PUR records). Only 1% of records could not be geographically enhanced beyond the square mile Public Land Survey Sections already reported in the PUR.

Caveats and Limitations: When apportioning pesticide use based on the area of overlap between the field and the Ľ mile area around the school, the study methodology assumed that pesticides were applied evenly across the entire field. There may be situations in which pesticides were unevenly or selectively applied, which could result in an overestimation or underestimation of the actual pounds applied within Ľ mile of a school. For example, if part of a field fell within Ľ mile of a school and if pesticides were not used on that portion of the field (e.g., in compliance with an existing regulation), this methodology would still assign some pesticide use to that portion.

Results are described in the report, executive summary, and FAQs.  Key findings included:

This study assessed the presence of a potential health hazard (i.e., agricultural pesticides) near a vulnerable population. This information can help guide policies and other efforts to minimize pesticide exposures of schoolchildren and design future public health research. However, the presence of pesticide use near a school does not mean that exposure has occurred or that the health of any child or adult has been impacted.

This study was supported by the National Environmental Public Health Tracking Program of the Centers for Disease Control and Prevention (CDC), Cooperative Agreement Number 5U38EH000953-02. Its contents are solely the responsibility of the authors and do not necessarily represent the official views of the CDC, outside organizations, or external reviewers.

For questions about the study or media inquiries, please contact the CDPH Office of Public Affairs by email or by calling (916) 440-7259.  Tracking California is a program of the Public Health Institute in collaboration with the California Department of Public Health.